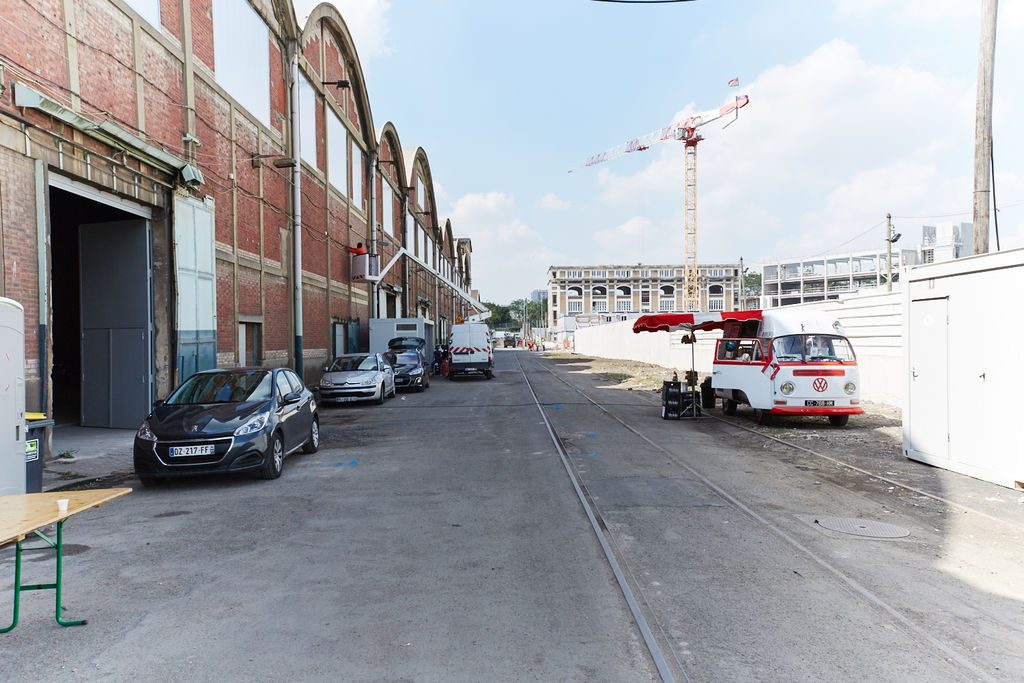 Spanning 11,750m², this site alone embodies an entire chapter of the metropolitan area’s industrial history. It is the southern section of the former Babcock factory, part of La Courneuve’s monumental heritage. Within an urban context currently being restructured, this site benefits from an optimal location in relation to public transport infrastructures: less than five-minute walking distance from RER B and T1, which interconnects with Metro line 7 and, in the future, the Grand Paris Express line. The former factory is also easily accessible from motorways A1 and A86. Finally, this site, which includes around twelve halls, offers remarkable architecture and spacious areas that ask only to be enhanced.

Mixed use neighbourhood: housing, areas for economic and cultural activities and events, open spaces to be used over time for multi-purposes

The site is located in La Courneuve, along the municipal boundary with Aubervilliers. Separated from the downtown area of La Courneuve by the A86 motorway to the north, it is part of an area characterized primarily by economic activities, which also includes a sports complex and residential buildings and a few residential streets.
The site boasts excellent public transport services. The RER B La Courneuve – Aubervilliers station is less than 500 metres away and is associated with a bus station that connects 6 different lines. The T1 tramway is located a few hundred metres away; it runs to Metro line 7 (La Courneuve – 8 Mai 1945 station) and in 2024 to the Grand Paris Express network at the La Courneuve – Six Routes station (line 15). The site benefits from direct road access to the Il-de-France motorways network.
The areas surrounding the site have been significantly revitalized over the past fifteen years, boosted by the arrival of the Diplomatic Archive Center of the Ministry of Foreign Affairs at the city's former freight station. At the same time, the RER B station and the surrounding area was revamped and the train frequencies increased, making it only a 7-minute trip and 2 stops away from the Gare du Nord. The Banque de France is currently building its cash centre on the northern section of the site, it should be constructed at the end of 2017, marking the arrival of approximately 350 staff members.
The redevelopment of this area will enable a vibrant, mixed-use neighbourhood to emerge, destined to act as a catalyst for the Plaine Commune territory.

Integration of culture and urban planning, a neighbourhood structured around its heritage, culture and creativity, temporary and transitory uses, used for experimentation, with the possibility of becoming more long-term.